Wood-N-You Like It, "Salvaging the Past for a Better Future"

The Return of the American Chestnut 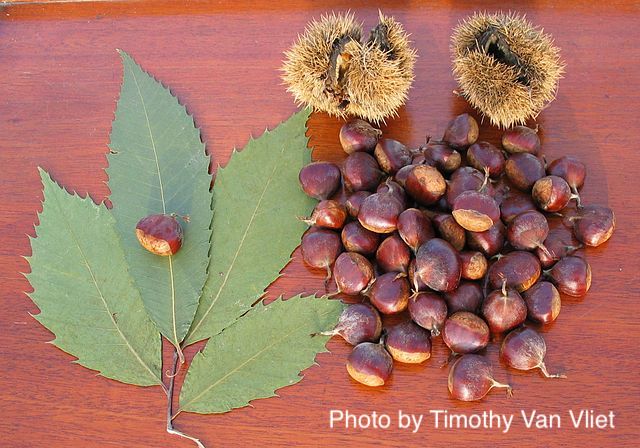 History of the American Chestnut

American chestnuts, giants that could grow up to 125 feet tall and 16 feet wide, once dominated the forests of Appalachia. These “redwoods of the East,” as they were sometimes called, made up between one quarter and one half of all the trees in their eastern forests. As the 19th century turned into the 20th, close to four billion American chestnuts towered over the landscape. Today only a few hundred mature American chestnuts survive.

At the turn of the century, a fungus known as Cryphonectria parasitica was accidentally imported from Asia on Japanese nursery stock and made its way through the American chestnut population, entering through wounds in the bark and cutting off nutrition to the trees above the infection site. The pathogen was first detected in New York in 1904, and by 1950, almost the entire population of American chestnuts was wiped out.

The American chestnut (Castanea dentata) is a fast-growing hardwood tree whose lumber is nearly as strong as oak, yet lightweight. While the heartwood is durable, the sapwood is prone to infestation, which is why most remaining lumber is known as wormy chestnut for its characteristic insect damage. Chestnut is easy to work and glues and nails well. Naturally rot-resistant, straight-grained, and formerly plentiful, American chestnut was once used for a wide variety of purposes, including home construction, cabinetry, furniture, utility poles, railroad ties, and musical instruments.  Reclaimed wormy chestnut lumber today is often used for rustic furniture.

Hope still remains for the American chestnut. Two distinct restoration efforts are underway, each with their own advantages and drawbacks.

The American Chestnut Foundation has been cross-breeding American chestnuts with Chinese chestnuts for years in an effort to breed a hybrid that is as much like the American species as possible, but with the blight-resistance of its Chinese relative. The Chinese chestnut is much shorter, growing to approximately 65 feet instead of 100, with leaves that are shorter, thicker, and more rounded. The breeding process involves crossing the American and Chinese varieties, waiting several years for them to grow, inoculating them with the blight, and then choosing the few that exhibit the most American growth habit and the best blight resistance for the next generation. After decades of this crossing and back-crossing, the foundation has come up with a hybrid that is 15/16 American and 1/16 Chinese and has very good blight resistance. Millions of these hybrids will soon be planted in various publicly and privately owned sites in the American chestnut’s natural range.

If one or both of these restoration efforts succeed, the American chestnut may return to its former glory in the forests of Appalachia. Perhaps future generations will once again prize American chestnut lumber for its ample availability as well its light weight, strength, straight grain, and rot-resistance. ay something interesting about your business here.